The Virtual World Heritage Laboratory (VWHL), based in the Indiana University School of Informatics and Computing, in collaboration with partners at the Politecnico di Milano and the University of Florence is digitizing in 3D the complete collection of Greek and Roman sculpture in the Uffizi, Pitti Palace, and Boboli Gardens on behalf of the Gallerie degli Uffizi. This is the third largest collection of its kind in an Italian state museum. Largely assembled by the Medici from the fifteenth to the eighteenth centuries, the statues include works of exceptional interest to students of Greek and Roman art, notably the Medici Venus, the Medici Faun, the Niobids, and the Ariadne.

The Virtual Garden: Didactic Reconstruction and Extended Experientiality in the Villa of Livia Frescoes 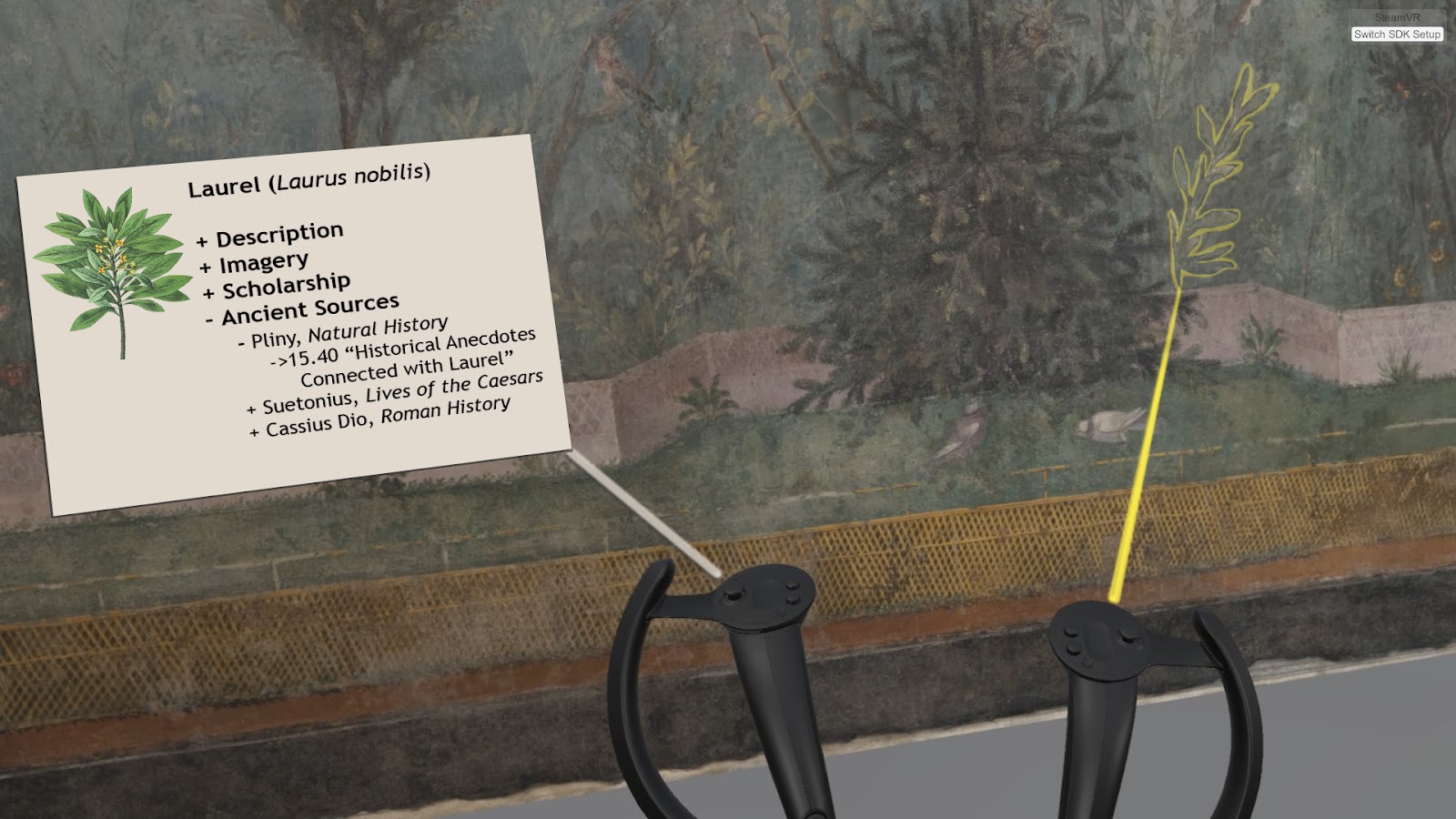 This project, in its early stages, proposes an extended methodology for presenting archaeological, art historical, and didactic information in VR—focusing on experientiality and presence for use in access, research, education, and outreach. Using a simple 3D scene containing a state model of the so-called Garden Room from the Villa of Livia, we create a framework that allows disparate primary and secondary written, visual, and audio sources to be referenced while a user is immersed in the scene. Additionally, we utilize the unique power of real-time visualization engines and vegetation modeling software to construct a 3D version of the 2D parietal garden. This approach represents a departure from traditional reconstruction in that it is the creation of an entirely fictional space derived from Roman iconographic tradition—one which could never exist in the real world. We argue that the ability to move between these two scenes (augmented reconstruction and iconographic creation) presents a marked improvement on traditional methods of viewing this architectural space. Project conducted through Mirror Stage.

Interdisciplinary Techniques for Studying an Engraved Etruscan Mirror with Tiur, Lasa and Turan

This study introduces an Etruscan mirror from a private collection (provenance documented before 1970) remarkable for its scene with three goddesses inscribed with the names Tiur, Lasa and Turan. This is the only inscribed image of the Etruscan moon goddess Tiur known so far, and the image of Lasa adds to the known corpus of representations of that goddess assembled by Antonia Rallo (1974). The field of the mirror includes two crescent moons, amplifying the symbolism. Preliminary study suggests the mirror belongs typographically, stylistically and iconographically to a group of mirrors from central or northern Etruria dating to the later 4th century BCE. In the initial study of the Etruscan mirror, new techniques of documentation, by means of µXRF (micro X-ray fluorescence) and photogrammetric 3D modeling, augmented the traditional methods of art historical and archaeological analysis and inquiry in order to virtually extend temporal and physical access to the object. Project conducted with Nancy De Grummond, FSU, and Matthew Brennan, IU.